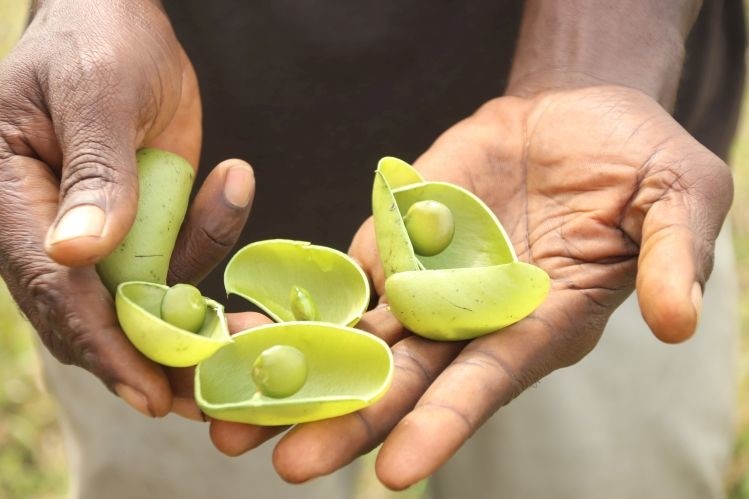 While 5-HTP (5-Hydroxytryptophan) is not something you’d find in Grandma’s kitchen, it is an established ingredient in the dietary supplements market, where it is claimed to promote calm, sleep, and ‘emotional wellbeing,’ says California-based NURA USA​​, which extracts it from organic Griffonia simplicifolia​ seeds sourced from Ghana, and has just completed a GRAS determination, opening the door for food & beverage applications.  ​

The tasteless, water-soluble branded 5-HTP ingredient (‘CLEANMOOD​​’) is heat and pH-stable, and can be used in everything from beverages (including hot fill) to snacks, candies and gummies, says NURA USA, which says a customer will be launching a beverage featuring CLEANMOOD later this year.

Produced by the body from the amino acid L-tryptophan, 5-HTP is a precursor to the neurotransmitter serotonin (which promotes feelings of wellbeing, calmness, focus, and confidence). It is also claimed to impact the production of melatonin (for sleep) and dopamine (reward) and has been shown in a handful of short-term studies to have potential as a weight management ingredient.

While you could argue that our bodies already produce just the right amounts of mood-friendly chemicals without dietary interventions, a range of factors from stress to vitamin B6 deficiency, insulin resistance, and insufficient magnesium can inhibit tryptophan hydroxylase from converting L-tryptophan into 5-HTP, and eventually serotonin, claims NURA USA.

Similarly, the amount of 5-HTP available for serotonin synthesis in the human body also depends on the availability of tryptophan and the activity of various enzymes, which may vary between individuals, according to a study​ ​published in the International Journal of Molecular Sciences​ in January 2021.

“By taking 5-HTP as a supplement ​[or food],” argues NURA USA, “one can bypass the issue of the rate-limiting step in the conversion of L-tryptophan to 5-HTP for the synthesis of serotonin.”​

5-HTP is naturally produced in the body from the amino acid L-tryptophan, and can increase levels of the mood-enhancing chemical serotonin, along with melatonin, dopamine, and norepinephrine, which impact the body’s sleep-wake-cycle, reward-motivated behavior and pleasure, and fight or flight response.

Griffonia Simplicifolia is an evergreen shrub in the Fabaceae family, that is native to west and central Africa. The fruit contains green and black pods with an orange center. Picture credit: NURA USA

However, many consumers do not want to take anti-depressants (which can come with unwanted side effects) or sleeping pills, and are looking – at least in the first instance – to ‘natural’ approaches to promote calm or wellbeing, from magnesium, melatonin, GABA and CBD, to botanicals such as passionflower, hibiscus, chamomile, and lavender.

The toolbox for food & beverage formulators is fairly limited however, as melatonin​​ and GABA are not GRAS; (ingestible) CBD is currently in a state of legal limbo in the US (it’s explicitly permitted in some states, but not considered by the FDA to be a legal dietary ingredient at a federal level); and there is limited human clinical data on many botanicals.

5-HTP, by contrast, has been the subject of multiple animal and human clinical trials in the USA, Europe, and Japan, although the dosage used in human studies varies considerably (see box below), while some studies feature very small numbers of volunteers, or focus quite narrowly on specific groups (eg. kids with night terrors), making it hard to determine if the effects would be replicated in a more general population.

Lily Ruan, president at Irvine, CA-based NURA USA – which supplies a range of ingredients from herbal extracts to proteins and natural sweeteners – told FoodNavigator-USA: “We obviously don’t have access to other people’s GRAS​ [determinations if they haven’t notified the FDA], but we think we are the first to do it for 5-HTP. ​

“We’ve only just started promoting this ingredient, but we’ve already had interest from several beverage companies from coffee to sparkling water to juice shots, ice cream, yogurts and gummies. In our GRAS ​[determination] we suggest a dose of 50 milligrams per serving and up to 200 milligrams per day.​”

What evidence is there to support 5-HTP?​

According to a study​​ published in the International Journal of Molecular Sciences​ in January 2021 reviewing animal and human studies, 5-HTP reduced panic attacks, panic symptom score, and subjective anxiety, when compared to placebo, in a small study with in panic disorder patients subjected to a ‘panic challenge’  (click here​​); while selected studies show increases in REM sleep​​ in normal subjects, and sleep improvements in children with night terrors.​​

NURA notes that 5-HTP has shown equal/comparable improvements in depression ratings when compared to antidepressant medications fluoxetine​​, fluvoxamine​​, and chloripramine​.​

5-HTP also promoted feelings of satiety, corresponding in decreased food intake and weight loss in studies with obese subjects (click here​​  and here​​, while NURA recently teamed up with researchers at Nova Southeastern University to conduct a (not yet published) randomized, double-blind, placebo-controlled trial with 49 healthy male and female adults aged 18-60.

Here, subjects were given 100mg of CLEANMOOD or a placebo for eight weeks. At the end of the trial, the CLEANMOOD group lost fat mass vs their baseline, without changes to diet or training habits, as tracked by MyFitnessPal, while the placebo group gained fat mass over the same period.

NURA also points to a small study​​ showing positive self-reported effects from supplementation of 25mg 5-HTP for six weeks in healthy subjects undergoing ‘romantic stress’ (a recent breakup), although cynics might observe that after six weeks, you might expect to have gained some perspective (plus there was no placebo group with which to compare).

That said, the subjects did experience a meaningful increase from baseline in platelet serotonin values and BDNF (brain-derived neurotrophic factor), which is connected to mood, among other things.

*These statements have not been evaluated by the Food and Drug Administration. This product is not intended to diagnose, treat, cure or prevent any disease.